In these ‘modern times’ we have forgotten what a vigraha/ moorti means or what a real temple/ Dev-alaya feels like. There are very few left, most of us haven’t seen even one of these real moorti-s/ vigraha-s in our entire life and neither been to a real Dev-alaya.

We Indians are known for creating massive temples and moorti-s of our deities. The invaders, both Muslims and Christians, destroyed our temples and the moorti-s. In these past 1000s years we have lost a lot, but we still have several functional temples and the ruins of the others are a silent testimony to their grandness. The ancient Indian temples are made of black stone. We do not know how old our temples really are. There are estimates of course, but these are more on the lines of educated guesses for the simple reason that stone cannot be dated.

Our temples have the main deity as a Moorti /Vigraha. It is not an idol, an idol does not have any consciousness, it is ’empty’. The Moorti/ Vigraha is a conscious entity, it is aware, with intelligence. If you know how, you can request it to power your intentions, which it will.

Modern Hindus feel it is a fashion statement to gift idols of deities. These generally are made of plastic and are to be apparently kept as ‘show-pieces’! Modern ‘interpretations’ of the images of deities. These are also idols, ‘empty’. In modern Indian temples, especially in North India and abroad, there is a new trend of fashioning the idols of the deities using white marble stone. The temple too is made of white marble stone. This idol is expertly carved and dressed up beautifully, quite attractive to the eye but ‘empty’. The temple also feels ’empty’ to me. White marble has no energy-value, it is incapable of absorbing the energy and neither can it radiate it back to the worshipper. This idol is made-up to look outwardly like the shape of the deity but it lacks the power of the deity. A idol made of white marble in a temple of white marble is not conscious, and of no use for the genuine aspirant. It is not a vigraha.

But there are still a few temples where the vigraha are aware and conscious. If you are lucky enough to ever visit them and experience it for yourself, you will know what I mean.

A Vigraha cannot be made just like that. How to make it, where to make it, when to start and finish, what material, which mantras to use, what tools and who should make it etc is a secret science. The Vigraha can be made in the shape of the deity with a human face, hands etc or it can also be a yantra. The vigraha-s will be made of black stone, metal or wood or anything else. This material and the entire process will be decided by a Guru. All this depends on the intended use of this vigraha. The carved image is then made conscious, ‘pran-prathishtha’ is performed. The Guru uses his own energy, amplified by the mantras to ignite consciousness in this specifically made shape, which then becomes a vigraha. This vigraha is now freed from the limits of its outward shape, it expands, becomes aware and it becomes a true reflection of the deity it represents. The part is also the whole, thus this shape created becomes a Vigraha/ Moorti. This process is most powerful when performed by a Guru. So the few temples in India where the Vigraha-s have been set up by genuine Guru-s are very important.

One exception is the real Shiv-lingam temples. The real Shiv-lingam stones are actually meteorites which are found on the earth. They are not shaped by human hands. A Guru identifies these stones and the temple is built over it. A real Shiv-lingam is never installed in a temple, the temple is built over it! I have visited the Kailas temple in Ellora, Maharashtra a few times, every time it takes my breath away. The Shiv-lingam is huge, I think it is 6 feet tall, and the energy is massive! This temple is exceptional as it was sort of ‘laser-printed’, from the top to the bottom. I really wonder at the Guru who identified this Shiv-lingam located metres deep inside the hard basaltic rock and the technology used to ‘laser-print’ the temple in this rock. This temple cannot be dated as it is completely of stone. If you live in India, or ever visit here, do go to see this temple and the Shiv-lingam for yourself.

Moorti-s in our ancient temples were for all aspirants of both paths, ie the Yog and the Tantra. Especially if the temple and the vigraha is of black stone and it is over 1000yrs old, it is an extraordinary thing. If you ever visit such a temple know that the deity is aware and conscious. We go to temples, do namaskar, offer sweets flowers and pray. The pujari/ priest gives us some sweets and flowers as the prasadam, we take it and come home. But if you are a spiritual aspirant, this is not making full use of the temple and its vigraha’s energy. If you do visit an active temple try to do the following, 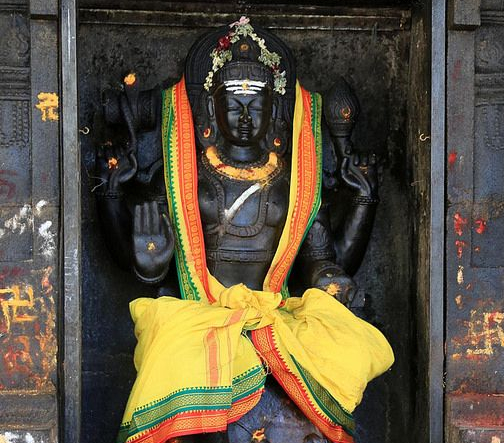 The moorti-s for dedicated tantric practices are again very different. They are often not placed in the main temple sanctum. Common householder people do not have the ability to see such moorti-s with their eyes, they might go insane. So such vigraha are either placed in a secret sanctum if they are very highly powerful. Or they are hidden, under masks made of gold or silver. Or decorated so heavily with flowers or sandal-wood paste, silk, etc that the actual moorti is not visible at all!

Here are some examples from some temples I have been to recently. In one temple, the moorti of Devi Kali was very beautiful and powerful, but there was something even more terrible in that sanctum sanctorum. A Shri yantra carved in stone by Adi Shankaracharya himself! Everyone was looking at the Devi’s vigraha and praying but the Shri Yantra on the ground before her hidden by flowers was the source of infinite power! There is a town called ‘Shri-nagar’ in Uttarakhand. It is called so because there is a Shri-yantra installed within the river bed here. Those aspirants who know how, will go to the river and do their practice near the water to channelise the power of the Yantra.

Another very famous temple known for a very terrible Devi from the Dasha Mahavidya-s. The Devi moorti on display is beautiful but it is not the real one made by the Guru. The real moorti of this Devi is in some inner room, not visible to anyone. But to those who desire to see her, she is quite visible in all her terrible intensity, if you close your eyes and request, you will see her in a very different way in your third eye. In one temple dedicated to Devi Dhoomavati of the Dasha Mahavidya-s, married women do not visit her as she will give them instant misfortune, extremely fierce and Ugra. All aspects of the Devi are not benevolent, some are terrifying for other types of purposes. The moorti was made by a Guru, so is bursting with energy. Even the moorti of Ayyappa at Sabrimala, where women in the fertile age group should not visit, is a tantric vigraha and will grant misfortune to such women who do. Similarly for the Shani vigraha at Shingnapur, it is the same thing. These are not idols, they are conscious Vigraha!

So the next time you go to a temple with a Moorti, do know that it is not an idol you are seeing, it is aware focussed consciousness. Looking back at you very intensely, so ask what you desire the most, you might just get it. The more powerful Moorti-s are very intense. Standing before them, or even in or outside such temples is a typical experience. It feels like someone has poured ice cold but refreshing water on you, the pran is intense, from the top of your head till your toes it enters every naadi, every hair stands on end. When you close your eyes and do your mantra jaap, you see things at your third eye, you don’t feel like opening your eyes, they feel heavy. You energise yourself at such places from the inside out. The Vigraha Moorti is a reflection of the Ultimate reality.