I have written on how to use Ashtakvarga on interpreting the transits of planets through the signs. It makes the judgement of the transits very easy. This table can be used for several other analysis with equal ease. This is the easiest tool for analysing the power of a planet to influence the signs of the horoscope. So check up any online Ashtakvarga calculator, input your birth details and get your combined Sarva Ashtakvarga table.

This is the example chart of Aleister Crowley, the greatest western occultist of recent times. A superlative genius. He created the Thoth Tarot which I use. His birth details are 12th Oct 1875, 11:43 pm at Leamington UK. His Birth chart, Navamsha chart and Ashtakvarga table are as follows. 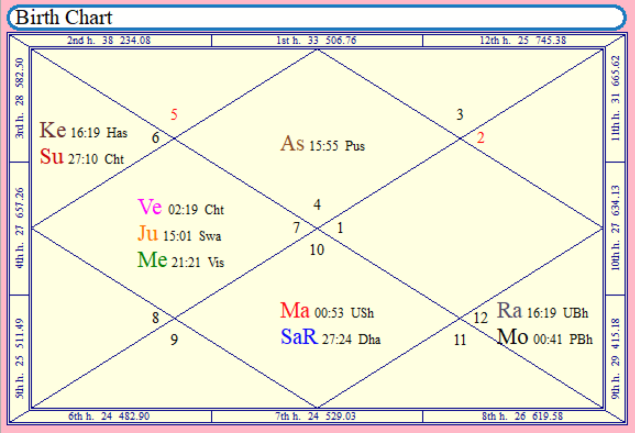 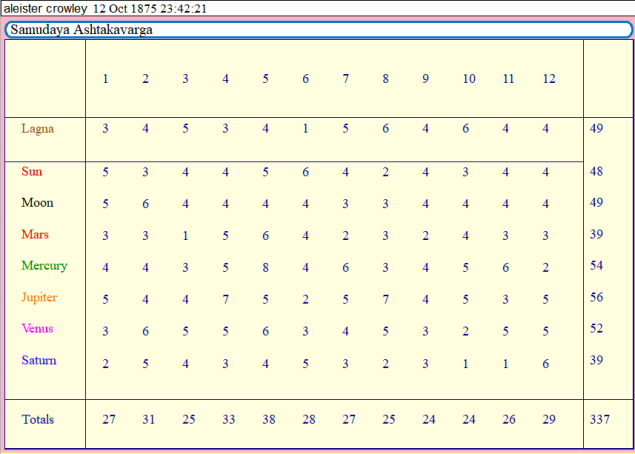 The Ashtakvarga table has several rows and columns. The top row is the Signs from 1-Aries to 12-Pisces. The first right column is the Ascendant degree and the 7 planets. ‘The Eight divisions’. Rahu-Ketu are not used in this table, instead the Ascendant degree/ Lagna is considered as a full-fledged ‘planet’ by itself. Each row is the score of that planet in the specific sign, this can vary from 0-8 points. The lowest row is the combined score of every sign this can vary from 0-56. To interpret this table there are only two rules which you need to remember.

1) Look at every individual planet’s row. You will see that each planet gets some points from 0-8 in each sign. These points indicate the power of the planet to influence this sign. The basic rule here is this

2) And the second rule. Look at the individual sign totals row, the lowest row, where the total score of each sign is computed. Here the range is from 0-56 points for each sign. Here you see the power of each sign to give results, because of its relationship with the planet’s placements.

You already know how to use the Ashtakvarga table for analysing the power of transits. Now for more ways to use it.

How to judge the power of a planet to give results in the birth chart?

What a planet is capable of giving is different, this needs to be analysed by matching keywords. Eg Moon in this chart, is the ascendant lord, with Rahu in the 9th house, aspected by the Sun and Saturn. So body and physical environment, the agent of the mind, astral self, emotions, ancestors, luck, past life’s merit, peers, patrons, spiritual father, religion, belief system, mother, traditions, cycles, nurture, security, protection, intuition, discipline, genius, intense desire to experience etc.

So even if he is going to give a lot of stuff, how powerful will be his results? This can be seen from the score that the planet has in the sign he is placed at birth. Eg the Moon in our example birth chart is placed in Pisces and the Ashtakvarga score for Moon in Pisces is a neutral 4 points. So Moon will neither give superlative nor bad results. They will be average. So it would be better the Moon energies are consciously improved by doing his Mantra, remedies, Sadhana, spiritual practice etc. In our example see the Saturn in Capricorn has the lowest score of 1. If you read contemporary accounts of Crowley, he was thought to be lazy, wicked, evil, crazy etc by the general society, he married several times the 7th house things were rather a mess, this matches to this low score of Saturn. Mars with him though exalted also has a score of 4, indifferent to very bad results for the 7th house tallied. This was as per our Rule (1). If you use Rule (2), Pisces has a total sign score of 29 so more or less average results. So the Moon remains average for this person, will work at 50% efficiency. And Capricorn has a score of 24, it is inauspicious. So the Saturn will give his results at very lower levels of his power.

So if you want to see how well a planet can give his results, check out his score in the sign he is in your birth chart, (rule 1). And the total sum of the sign (rule 2). Together these two scores will give you your insight. 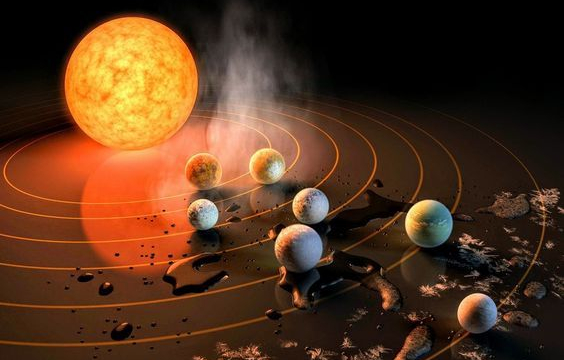 You can make more detailed use of the table to find out will some planet’s influence are more powerful than other? In our above table, the Moon-Pisces is aspected by Sun and Saturn both.

When we analyse our birth horoscope, we count the houses from the rising sign, the regular birth chart. And in the second Birth Moon chart, we count the birth moon sign as the first house and interpret the signs and planets in relation to the Moon’s placement. But every planet is powerful in its own way, so we should ideally draw a separate birth planet chart for every planet, eg a birth Jupiter chart where birth Jupiter’s sign is counted as the first house. But doing this for all the planets would be quite confusing and tedious. So we calculate the Ashtakvarga. Arriving at this Ashtakvarga table is also quite a tedious affair, but now our software does it, so its just a click of a button. 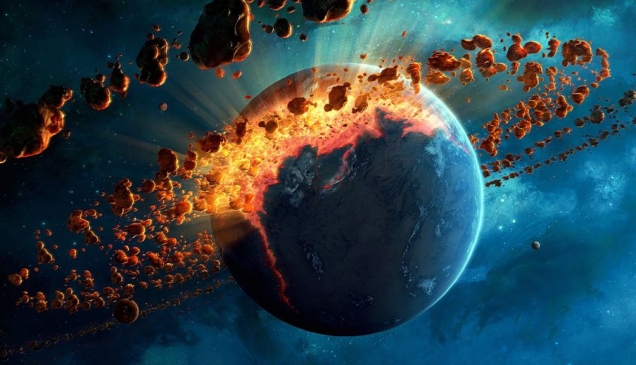 Now how to use Ashtakvarga chart in determining the power of the Dasha periods.

The most commonly used system for Dasha, planetary periods is the Vimshottari Dasha system. This is the first system that is taught for students and is quite accurate and easy to understand. There are five layers of planetary periods, sub-periods, sub-sub-periods, as every minute of your life is mapped out (Maha-dasha, Antar-dasha, Pratyantar-dasha, Pran-dasha Sookshma-dasha).

Let’s analyse the Mahadasha/main period and Antardasha/sub-period using Ashtakvarga. Suppose that for our example chart, the current Mahadasha is Jupiter and the Antardasha is of Mercury. This will be written as Jupiter-Mercury. Your software will also give the Dasha for your birth details, check it out. Sometimes you see that the Dasha period ruler planets occupy the best positions in your birth chart, are capable of giving such good results, but in the actual period, these good results do not materialise. Then you need to see the Ashtakvarga table.

Now to apply rule (1), check where Jupiter is in the sky now, the current transit sign is Scorpio. Check Jupiter in Scorpio score from the example chart. In our example it is 7, very good results expected. Now Mercury, the sub-period lord, is currently in Libra. In the ashtakvarga table above Mercury-Libra has 7 points again very good results. Next apply rule (2). Here the total of Scorpio is 25, this is on the lower side, inauspicious. And Libra has a total score of 27, indifferent, not good/bad. So we can combine these results and say that, at this point of time, this person will have reasonably good results for this Vimshottari Dasha main/sub period combination. However he should be alert for anything happening unexpectedly. This analysis should be re-done when the Jupiter transits onwards to Sagittarius and Mercury transits to Scorpio as the dynamics change. Ashtakvarga makes things so very easy!

So if you want to see how the combined dynamics of the current transit plus the current Dasha main-lord and sub-lord works out to be, check out the Ashtakvarga table and follow the two rules.

The Ashtakvarga does not use Rahu/ Ketu in the table. They have no points and no scores. The main reason is that these planets have no material results on their own. This table talks about the material and tangible results only. No psychological babble here. So if you have clients who want to know definite results, marriage, money, children, health, job, property you have to see the Ashtakvarga. Everything is reduced to numbers here, so you can arrive at a percentage of intensity, percentage probability or 50% chance that this will happen sort of results. of course to improve the percentages you have to prescribe some spiritual activity, remedy or something which will help bringing that planet more in focus.

But the Dashas? Rahu and Ketu are owners of Dasha periods and they also transit, but they do not have a score here. So I use an approximation which has worked for me. (If you think it is incorrect, do not use it). The reasoning being, Rahu and Ketu give material results through the planet who is conjunct him.  If there are no planets conjunct him, ie in the same sign, then Rahu and Ketu take on the characteristics of the sign’s planetary owner. So in the above example I would use the sign-score of Sun to get an idea of Ketu’s Dasha period. And the sign score of Moon to get an idea of Rahu’s Dasha period.

So here was a very practical post on using Ashtakvarga in more ways,

(There was a question on using the Ashtakvarga, thus these two posts. I would recommend books by C.S.Patel to those who want to learn more, but his books are more for the advanced students. For the beginners, try using the tables for basic analysis as I have written and later read the books.)

4 thoughts on “Ashtakvarga, practical ways of using the tables”