The Eternal reality is Singularity. It divides into a Still Intelligence called Purush पुरुष the Witness, साक्षी and a Spontaneous Evolution called Prakruti प्रकृति, the player Lalita ललिता. Purush is an observer, not concerned with further manifestation.

Prakruti spontaneously creates the three Gun गुण within Herself. These three Gun are the foundation of manifestation in a very subtle way. I have referred to these in my several posts by their simplest definitions,

Now these three are the very fundamentals of manifestation. The Bindu (Prakruti) divides into the three chakras initially, Vama, Jeyshta, Raudri which represent the energies of Satva, Raja and Tama. (Refer to the geometry of the Shri yantra and the conscious energies of creation. These three are represented by the inner-most equi-lateral triangle around the central dot).

The Prakruti the Great Mother, is also called the Pradhan प्रधान which means that all things are contained within Her, she is prominent, chief, most important, essence, original source. She is the Cause and also the Effect. ‘Cause and effect’, we think of these two things as separate and distinct from each other. But if you think deeply these are quite similar on the deeper levels but yet dissimilar. e.g. Cream is formed on milk, that means that milk has the potential to form cream (cream is hidden in the milk), and cream does contain properties of milk (milk is hidden in the cream). Thus the effect is just the transformation/ evolution/ involution (Parinam परिणाम) of the cause.

Prakruti is defined as the state where the Satva, Raja and Tama Gun remain in perfect equilibrium. This is the Avyakta अव्यक्त, unmanifested, potential, invisible, universal spirit, primordial germ, inactive, unexpressed, latent state. Prakruti is Non-Intelligent. The reason is the three Gun. She is composed of the Satva, Raja and Tama which are in constant equilibrium and in spontaneous equal constant motion. Neither of these is greater or lesser, thus they ‘cancel each other out’. Thus she is Spontaneity.

These three Gun, Satva, Raja and Tama are always linked with each other, they are always in conjunction and cannot be separated from each other. They continually influence each other, forever mixing in different proportions. As long as they are equal in force there is no manifestation. Prakruti is in constant movement and this motion powered by the continuous mixing and movement of the Gun. The Gun give direction to evolution/ involution. These three are all pervading, in every thing you see around you. These are the first ‘effect’ of Prakruti, so are in everything of this manifested Universe. They are energised by Prakruti.

The three Gun are initially in equilibrium, in the Avyakta, un-expressed state, this is pure Prakruti. Prakruti is the first Tattva of Creation. Tattva तत्त्व means a distinct state, element, principle or essence.

Then there is a spontaneous Spandan स्पन्दन, which means throbbing, vibration, motion, start of life in the energy of Prakruti. This causes an imbalance in the three Gun and the Raja overpowers the other two. This leads to the Vyakta व्यक्त state, things start getting obvious, clear, evident, expressed and manifested. The Gun always remain in motion, now that they are out of equilibrium they will cause subtle changes in the next manifested tattvas of which they will become a part of. There is constant change everywhere because of their constant movement at the deepest fundamental levels.

Now after the Spandan, the Gun’s perfect equilateral triangle is disturbed. And Raja is immediately released by the imbalance, it acts on the Satva to produce Mahat-Buddhi which is the 2nd tattva of creation. Mahat-Buddhi is a new thing different from Prakruti and the three Gun hence is called a new Tattva. But it is still composed of the three Gun and energised by Prakruti. It is a transformation/ parinam.

When you do Dhyan, the very last and deepest stages, you are required to set this three Gun in their equilibrium stage again with your conscious manipulation of Pran. There are several ways to manipulate pran. (I read on the internet where people take classes to awaken their Kundalini and its always a facepalm moment. Can you control your breath? For 99.99% of us the answer is No! First learn breath control, then try to control pran, only then can you even think of the Kundalini and forget about ‘controlling’ it!. You would be lucky if you first clean out your Brahmanadi till the top with the pran first and then the kundalini unlocks and moves upwards in one smooth uninterrupted flow.)

There is no ‘physical God’ in Sanatan Dharm, we worship Intelligent Energy. And by ‘worship’, we try to entrain our limited beings with their Immenseness so that we ultimately experience and transcend them.

The Creative principle is the duo, Brahma ब्रह्म and Sarasvati सरस्वती. These two principles are Rajasic in nature. Brahma is the potential and Sarasvati is the active principle of Raja. In the Vyakt/manifestation, as the two principles of Raja act first, the active and potential principles of Satva, Laxmi लक्ष्मी and Vishnu विष्णु also get active by the influence of Brahma/Sarasvati. Together with these, the active and potential principles of Tama, Shakti शक्ति and Shiv शिव also start acting. These six energies are worshipped as Gods and called husband/wife of each other too. Though we visualise them as human figures and make human stories for them, they are not humans, they are pure conscious energies. So when you are ‘worshipping’ this Trinity of Sanatan Dharm, the husbands/wives, you are actually rebalancing the three Gun, Satva, Raja and Tama Gun in your own body /mind / Universe.

Now a secret. You are not Prakruti, you are the Eternal Singularity. You are neither your body nor your Universe, you are more than this. Prakruti is the active principle derived from the Eternal. Prakruti is a small part of the Eternal. If you think on the intellectual level at least to begin with, that that everything that you do, see, experience etc is not by You but by Prakruti, you will Realise Yourself faster. 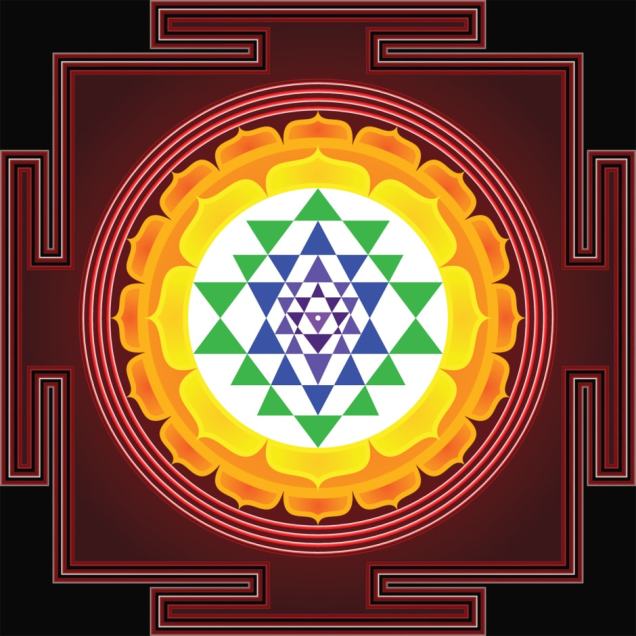