Coconut in sanskrit is called the “Shriphal”, the ‘fruit dear to Shri’. It has several uses in Sanatan Dharma/Hinduism. It is used in pujas, in black magic, as a blessing, to curse, as a store of energy, to remove negative energy, as offerings, as an energy sacrifice, to amplify intention etc. And of course the culinary uses, from making prasadams, to chutneys, to adding flavour to your prawns and fish curry! It has diverse medicinal uses too. The water from a tender green coconut is a very healthy electrolyte drink. And coconut oil is the tastiest, you can cook your food in it or apply it to your skin/hair. Such a wonderfully perfect all rounder fruit. The coconut.

Coconut have the ability to absorb energy. So you can charge a coconut with your intentions or energies from mantras and pujas. Such a coconut should be brown colored and have water inside, you can shake it to confirm, the water will slosh inside it. And should have a tuft of brown fibres at the point where it has its three ‘eyes’.

Puja of a kalash kumbh above is carried out during auspicious days where the Devi is worshipped. Most commonly during Durga puja/Navratri this set up is made and the energies of the Devi are invoked inside this. After the puja is complete the energies are ritually requested to leave the set-up too. The water from the pot/kalash is sprinkled around the house and the remaining put under a tree. And the coconut is then given to the priest/pujari who has performed it, along with the rest of the accessory stuff, he disposes of it in running water etc, depending on the pujas that has been performed. 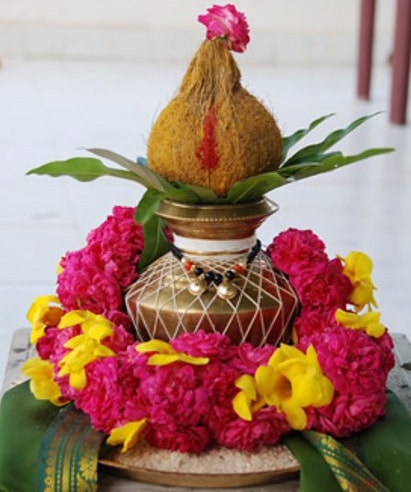 Coconut is extraordinary because its liquid ‘coconut water’ is similar to the water inside your body’s cells. When you intend, every cell of your body participates in creating this intention. So in rather cryptic way, the energy of your thought resonates with the water inside your cells and also in the water of the coconut you hold in your hands. If you are required to keep it in your altar, it acts as an energy battery, an object of positive auspicious energies.

But sometimes you have to break open the coconut. The energy released and the water split has the power to amplify the intention and carry it to the Lok/ dimensions of creation (Bhuh, Bhuvah, Swah, Mahah, Janah, Tapah and Satyam. The energies of these dimensions are linked to the chakras with your energy body). Depending on the power of your intention, the breaking of the coconut can carry it to the highest possible energy levels and manifest your wish from the highest energy planes.

In the Hindu/Sanatan Dharm the last Sanskar is Anteyshti where the physical body is offered to the conscious energies of fire/ Agni. During this, as the body is consumed, the skull cracks open. The energy of the Anteyshti is released at this moment and it propels the soul to the energy dimension where it will reside till it is time for its next birth. The cracking of the coconut releases the same sort of energy, here it propels your intention up the energy dimensions.

Coconut is a very cryptic and very auspicious fruit which you can programme and use as a tool in your energy work in several ways.

(There was a question on disposal of coconuts which have been used in rituals, hope this post has been of use!)