A ‘Tilak’ is a mark that a Hindu/a follower of the Sanatan Dharma wears on the his/her body. A average householder wears a tilak on his forehead first thing after having a bath.

When we sleep at night, our consciousness is drawn away from the physical body, ie the anna-mai-kosh. This physical body sheath is given just the basic minimum pran required to run the basic life processes. The individual soul/ Jivatma withdraws to the subtle body, the sookshma sharir during the dream state and deep sleep states. When you wake up in the morning, the consciousness again reanimates the physical body, but the sleep/ dream states have interfered with the body’s nadi/ pran wiring, it is seen in the aura, it is somewhat ‘blotchy’. When we have a bath and the body is made wet, the aura is withdrawn into the body. Now when we dry ourselves, the aura fans out again, you feel it’s warmth. Now this new refreshed body /aura /mind /soul needs to be reminded of its divine connection. So you put a tilak on your forehead at your ajnya chakra. The Ajnya chakra is the seat of the individual soul, this chakra controls the intake of the pran from the Universe and also the allocation of pran for the activities of the body/mind. This is the place where you have to concentrate on when you do your spiritual practice. So when you put a red tilak here you are literally energising your entire self.

Listing out these several types of Tilak-s used commonly, 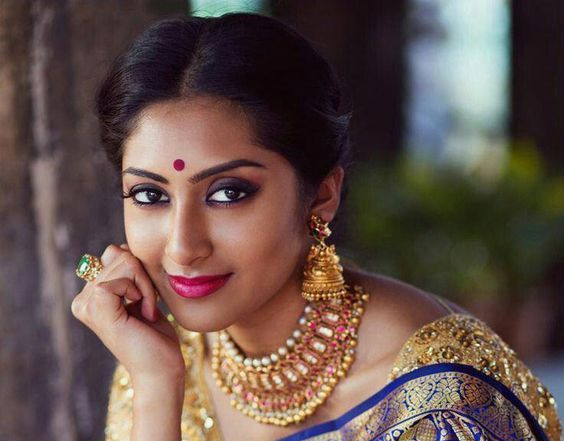 A red dot between the eyebrows at the point of the third eye, ajnya chakra.

This red powder is called Kumkum. It is generally made by mixing ground turmeric powder and slaked lime with a drop of lemon juice. But this mark is really made by rubbing a strand of saffron/kesar in a drop of water. ‘Kumkum’ is a Sanskrit word which means saffron, Crocus sativa. This is the most potent Tilak, if you can afford the saffron strands, you should wear this on your forehead.

This red tilak is used by any person who wishes to acknowledge his higher spiritual self within himself or herself. It is used by both men and women who do puja of Devi, the feminine force who animates this creation. Married women compulsorily wear this on their forehead to indicate prosperity, ‘Shri’. A married woman is the Gruh-Laxmi, the sign of prosperity of the household. She wears this red tilak in recognition of her own divinity. There is variation of the red dot, the red crescent, with or without a round dot. This now represents the crescent moon that the Devi wears on her forehead and increases self-confidence, strength and aggression too. 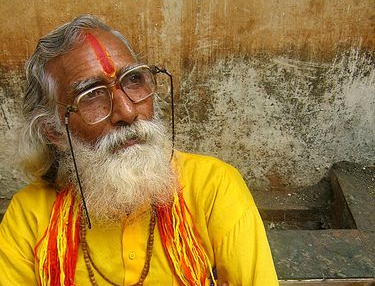 Then there is a form of this saffron tilak which starts at the third eye Ajnya chakra and continues into the hair, till the top of the head, Brahmarandhra. It is a red line from the center of the eyebrows to the top of the head. It connects the seat of the individual soul, the third eye to the seat of the Ultimate, the Brahmarandhra, it links the two. If you use Kesar/saffron charged with mantra to draw this tilak your spiritual progress speeds up.

(For women the 5 days of the monthly cycle will again pop up.You cannot do pujas or anything on these days, so the modern world has the short cut of the sticker bindi! You can also use the red turmeric mix on these 5days)

The tilak is made even more potent by putting a few grains of raw unbroken rice on it. These rice grains are placed before the deity you worship and they absorb the energy of your puja mantra etc. When you wear the rice grains also on your tilak the energy here becomes magnified exponentially. 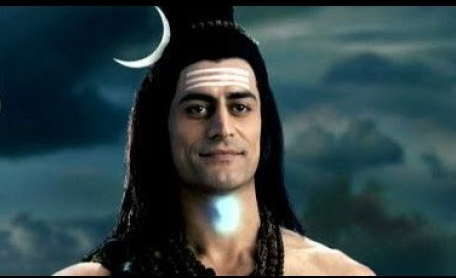 Vibhuti is the greyish ash which remains when you do a homam. A homam is a small version of a yadnya. All Hindus are supposed to do the Agnihotra Homa every sunrise and sunset so there is ample Vibhuti always available. (A simple Homam does not need much. A small inverted pyramidal copper homa-kund, desi Indian cow’s cowdung cakes and its milk’s Ghee. The cowdung cakes and ghee is burnt in the homa-kund with accompanying mantras. The energy of the mantra enters the ash, the Vibhuti. This Vibhuti can be used in several ways. Often the vibhuti is applied as a simple dot at the third eye chakra.)

Wearing a Tripundra is a a level-up. You have invited a specific type of energy into yourself. Shiv is the potential energy of the Tama-gun and Devi Shakti is the kinetic active form of Tama-gun. When you put their marks on your forehead you are clearly intending that you desire Moksh. The three lines are the three Gun, Satva Raja and Tama, the building blocks of the creation and red dot represents the combined energy of creation. (A red line represents your real self or connection to your real self.) You are using Vibhuti, burnt ash as to draw the Tripundra. This indicates that you want to destroy the three building blocks of creation and progress onwards. You want to dissolve creation and the creator both and go beyond them to your own Reality. The red dot is made with saffron charged with mantras. It is a big commitment. If you wear these marks on your forehead, you should be aware of your own actions and your conscience at all times. 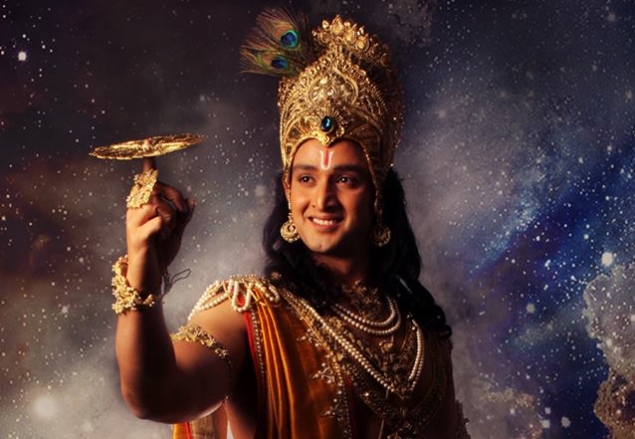 The Urdhvapundra. This mark is made by three vertical lines on the forehead. These three lines meet at the third eye chakra. This mark is to be made with sandalwood paste. Sandalwood has the effect of calming down the mind, it is easier to concentrate. The movement of the pran in the nadis becomes less turbulent and you can work better with it. Worshippers of Vishnu draw this on their foreheads. It can be drawn with the fingers or using a stick of the Tulasi plant (Ocimum sanctum). These three lines represent the three main nadis, Ida, Pingala and Sushumna which are connected at the Ajnya chakra. Sometimes the central line of the Urdhvapundra is drawn with red powder or more correctly with saffron. If the Urdhvapundra design is too complicated, a sandalwood dot at the third eye chakra can be applied instead.

Vishnu is the conscious potential of the Satva-gun, it increases the inclination of the aspirant towards the Ultimate reality. The red color is representative of Agni/ pran. Same as the Tripundra, the Urdhvapundra indicates that the three building blocks Satva-Raja-Tama have to be channelised, balanced by the active use of pran/Agni and one they are balanced the central dot of your internal geometry can be accessed. (Everything ultimately comes down to Shrichakra!)

So if you wear either of these marks linked to Vishnu or Shiv the seriousness remains the same. Satva and Tama are by themselves incapable of movement, it is only Raja-gun which moves them so that you can use their potential to move onwards on your spiritual path. You are reminding yourself of your commitment when you wear these special tilak marks.

Now how to put a tilak? The right hand is used always,

Ring finger – The best option for putting a tilak on everyone. This finger is called Anamika and is ruled by the Sun. It represents the Prithvi mahabhoot (solidity). It increases prosperity confidence, creativity and brings you closer to your internal divinity.

Middle finger – This finger is called the Madhyama, ruled by Saturn, represents ether, Akash Mahabhoot (ether).  It increases endurance and the capacity to work. It is rarely used alone, generally will be used together with the ring finger to draw an elongated type of tilak.

Thumb – this is called Angushtha and is ruled by Venus and represents the Agni mahabhoot. A tilak applied with the thumb increases valour, courage and mental strength.

Forefinger – The index finger is called Tarjani and represents the Vayu mahabhoot (air), it is also linked to the planet Jupiter. It is never used to apply tilak-s to a living person. Is used to apply tilak-s to a dead body at the time of cremation. A dead body is the discarded vessel, the spirit is now in the body created by only Vayu and Akash mahabhoot. So you are really intending that the energies of the tilak reach the spirit’s body by using this finger.

Little finger – this is called kanishthika and is linked to Mercury and the Aap mahabhoot (fluid). This finger is never used to apply tilak-s. It is highly inauspicious as it increases mental turmoil. If you know how, you can make someone go insane just by putting a tilak with this finger on his third eye chakra. 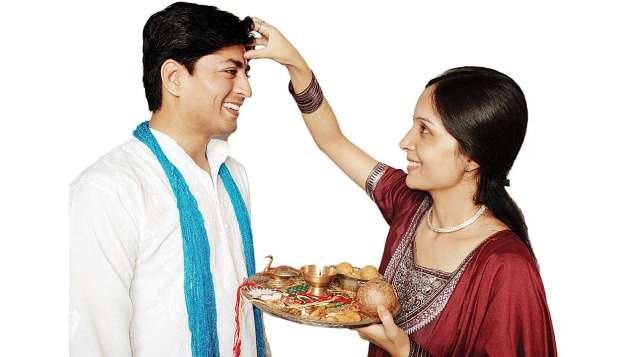 But the point of the third eye chakra is very sensitive, so here are a few things. Do not let random people put a tilak on you. Do not put random stuff on here, eg vibhuti from unknown places can be dangerous. Do not put a black colored tilak on your third eye chakra ever. This will attract negativity into your energy system. Avoid chemicals. Most red powders sold as ‘kumkum’ are dangerous dyes, they will not do anything for your spiritual growth and you might develop skin allergy. The turmeric-slaked limestone (a very small pinch of choona) mix is safer, if you cannot afford saffron.

So do wear a tilak on your forehead. If you feel shy about wearing it throughout the day at least wear it for some time after you have your bath till you do your puja. It will energise you from the inside out. 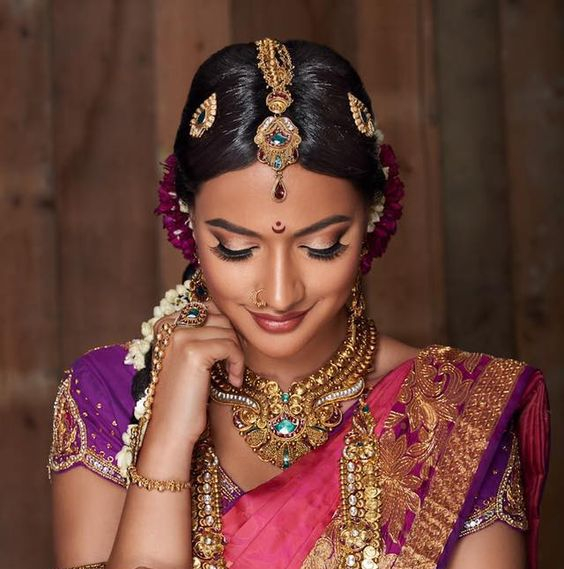