Devbhasha Samskrutam aka Sanskrit is the original language of this universe. It derives from OM, the seed of this universe we exist in. Rishi Panini ‘saw’ its grammar from Akash and wrote it. Sanskrit is linked to your DNA and is the perfectly arranged language of Light. It cannot be translated as there is nothing you can translate it to. And just because someone has learnt to read/ write it, does not mean that he has understood the texts of Sanatan Dharma or its texts, Sanskrit has layers and layers.

A simple example. There is this very common Sanskrit shlok in the praise of Shri Ganapati,

It is generally translated as ‘Ganapati is the beloved son of Devi Parvati. Her face lights up with love for him and thus that radiance falls on him. Similarly the blessings of Ganapati fall on his many devotees who worship him with devotion.’

The pictures I have put in this post are of the soft-grey colored Shri Dhoomraketu Ganapati. This is his form in the current Kaliyug. He destroys the Ahamkara, self-ego, sense of individual ego and thus grants Moksh.

And this shlok also means this,

Om – is the seed of this universe, the pranav-mantra.

Agajaa would mean ‘the child of the mountain’, ie the Kundalini rests on the highest energy point of the Mooladhar chakra which is linked to the Pruthvi tattva. Kundalini or Devi Shakti is also called Parvati, the daughter of the mountain/ Parvat Himalaya.

Anan means face, access, door, entrance and its also indicates non-movement, non-animation etc. The Kundalini at rest is the Agajaa-annan. She rests/ sleeps with her ‘face’ blocking the entrance of the Sushumna.

Padma as I have mentioned in an earlier post, is the conscious energy of time-space and the rest of the dimensions. It also means lotus, chakras, a serpent, sinous movement, an elephant with its massiveness and can also indicate a complete merging.

Arka is the light of the internal sun of self-awareness experienced at the end of the twelve chakras, at the Dwadashanat. The ‘Light of the Self’.

Gaj-anan is the opening of the Sushumna located at the Mooladhar chakra. I have mentioned somewhere that Gajanan/ Ganapati is the deity whose permission is necessary for gaining access to the Sushumna. (Deity means conscious intelligence, there is no classical ‘god’ in Sanantan Dharma)

Gaja is earth tattva, the foundation from which the Kundalini will make her move. Or also the solidity, steadiness of your spiritual practice.

Aharnisham means continuously, constantly, steadily, day/ night. But it also means the illusion of the individual soul/ Jivatma being separate from the Parabrahma.

Anek-dantam-bhaktanam is ‘a separated point’. The best way I can describe this is something like the school physics experiment of interference of light waves. A single point is viewed as being divided into multiple points. The same point is ‘divided’ into many. How can a point be divided? Ask your physics teacher if he can explain. Or ask a quantum scientist and be amazed when he speaks of Sanatan Dharma.

So this simple seeming shlok/ verse has completely different hidden depths. A real genuine Guru would be able to add more meanings and perhaps also grant the experience of this Shloka. See what you make of it? 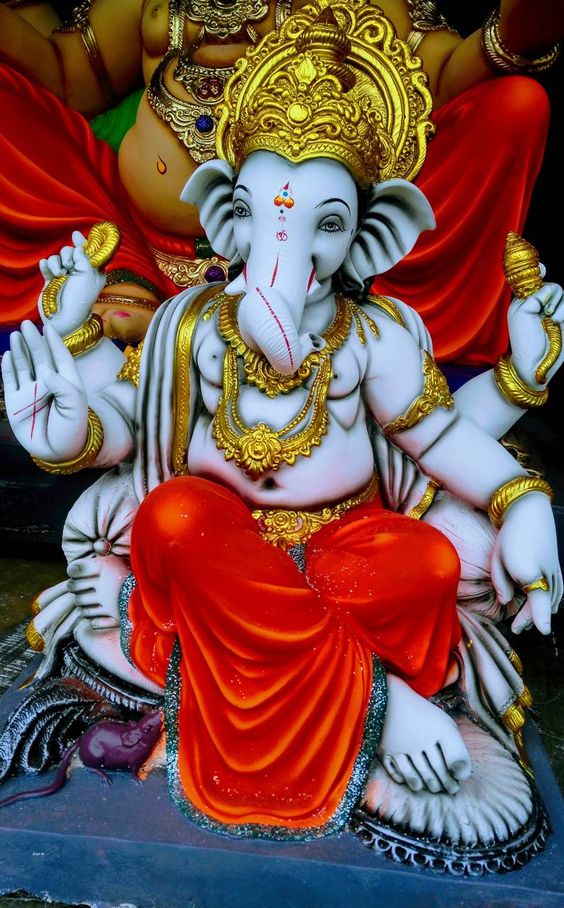 So to address the question that someone asked me.

How genuine are the translated Sanskrit works? The answer is that someone understands something as per his level of understanding. And understanding depends on the level of experience. And experiencing Devbhasha Sanskrutam requires contemplation. You have to do continuous Dhyan over it to experience it. eg When you are doing your Dhyan with the ‘Soham’ mantra you are experiencing, understanding it. More you meditate on Sanskrit more deeply will you experience/understand it. Sanskrit is a palimpsest, layers and layers of meanings. So if you choose to read a translated book, choose after evaluating the translator well. And at least read the original Sanskrit shlokas/text if you can.

Change is constant. There can never be utter stillness in the manifested creation. There is always movement. The energy of the manifested creation is visualised as the Shri – yantra. The top-most triangle of this geometry is the Tri-gun, Satva, Raja and Tama. These three are in continuous movement which percolates throughout creation. This movement is of intelligence, consciousness and awareness, an actual flow of intention and energy, of desire. There are two possible directions to this movement. If this movement is directed towards the outer worlds, it is called Pravrutti, an evolution towards the material stuff, the soul desires to enjoy the charms of creation. If this movement is directed inwards towards the inner self it is called Nivrutti, involution or spiritual evolution. The soul desires to know oneself and attain Moksh. A soul cannot have both at the same time. You are either wrapped up in the material or directed towards the spiritual. Both together are not possible.😉

Now let’s see what Ganapati’s trunk has got to do with Pravrutti and Nivrutti.

The figures that we see of our deities are an approximation of their real natures. It was not wild imagination that our Rishi-s/ Seers designed the moorti-s as such. There is a reason behind every feature of the figure, right from the mouse he is supposed to sit on, to the snakes placed around his navel and as a yadnopavit. Ganapati is depicted as a chubby human body with an elephant’s head. The face is a cute elephant’s face with the trunk coiling towards the left side. The tusk on the left side of the face is broken. This is the usual depiction, the left coiled trunk, left tusk broken. This is the relatively gentler aspect, the Saumya version. We keep this moorti in the house, the office or the car for worship. There are no special rituals needed for worshipping this Ganapati and he is quite the playful adorable cuteness he seems to be. He represents Pravrutti in this form. He will grant desires related to material desires quite happily. And if you want him to satisfy the spiritual calling, that too he will grant equally happily.

Then there is a rare depiction where he is shown with his trunk coiling towards the right, the right tusk is broken. This moorti is seen only in some temples where dedicated brahmins offer it worship as per strict rules, this depiction is never seen in personal worship or kept at homes. The Ganapati Moorthi depicted with his trunk coiling on the right side represents Nivrutti. This is the Ugra or fierce form of Ganapati and if you perform rituals connected to him, he will systematically take you deeper and deeper into your own self till you find your own reality within. His gifts will be the gifts of self-realisation, ultimately Moksh. But the route will be painful as it will involve removal of all the illusions of the material world. When a child realises that there are no fairies, there is pain, but he grows up. Similarly when you are made to realise that the mother, the father, husband/wife, son/daughter are all illusions there is intense pain initially. He is then the Vighnaharta in the real sense. Vighna is uncontrolled movement, sudden motion, impediment to progress, opposition to the understanding of Reality. Harta is the one who destroys. He will grant you the ultimate prosperity of self-realization. So if you worship Ganapati in his Nivrutti form and ask for material prosperity, he will grant it to you, but it will not be satisfying, as he will also make you realise its temporaries. As you have invoked Nivrutti, you will be made to move inwards sooner or later.

This right-trunk form of Ganapati is considered by some to be the tantric form of Ganapati, this is incorrect. A Vigraha/ Moorthi designed for tantric use is made in a very typical manner, in a very specific location using specific materials and with specific mantras. It can be right or left handed both depending on what use it is going to be put into. 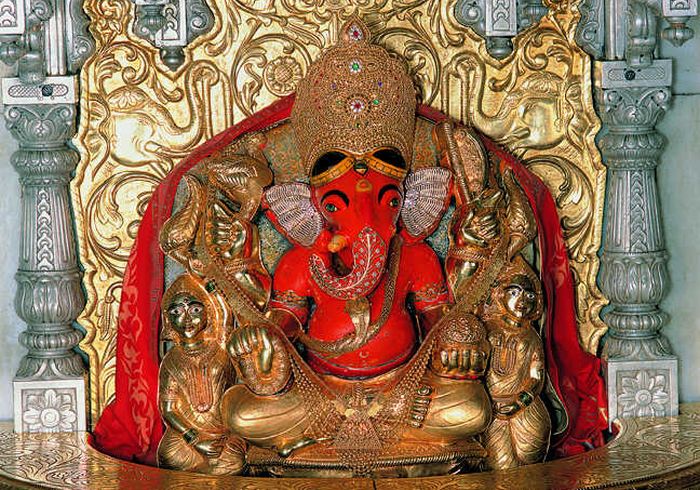 All the iconic symbols of Sanatan Dharm are available in the outward evolving Pravrutti or the inward moving Nivrutti form. eg The Swastik drawn spiralling in the anti-clock wise direction is again a representation of Nivrutti. Only tantriks and spiritual aspirants who know what they are doing will use this anti-clockwise Swastik in their rituals. Then the Dakshinavarti Shankh represents Nivrutti. It is called Shiv’s shankh and is never blown by householders. It is very rare and it is against the rules of nature, it is a mutation in the animal which makes it create its shell in the reverse direction. This type of conch is now being marketed as being Devi Laxmi’s symbol and will give endless prosperity. Someone I know was desperate and wanted to buy it for doing pujas on Diwali Amavasya. She wanted wealth and money. But this Shankh is the same energy as the right coiled Ganapati’s trunk. It’s primary drive will be to grant spiritual prosperity. Materialistic people might get money in the short-term, but ultimately they are invoking Nivrutti. Devi Laxmi will remove their illusions as to material wealth eventually and offer them the spiritual path if they dare to take it (to know the real nature of Devi Laxmi read the Laxmi Tantra).

The nature of Pravrutti is clockwise movement, it is spiral. And the nature of Nivrutti is also a spiral but anticlockwise. One simple experiment you can try if you want to. When you stir stuff, eg milk, do it in the clockwise direction and while doing so recite any mantra eg Gayatri mantra. Drink this. Do this once a day for 21 days and see for yourself. (And in the converse experiment, stir things anti-clockwise and if you drink them, you will get a tummy upset.)

Ganapati is also called Ek-dant (having one tusk) or Vakratunda (curved trunk). Now ek-dant also means ‘one focussed point’. And Vakratunda is literally how the opening of the Sushumna is like. The opening/mouth of the tube-like Sushumna is highly twisted and curved. Unless you are extremely focussed, single-point concentration you cannot navigate and enter it. Ganapati is the guardian of the Susumna. His Vahan is the Mushak, ie he is shown sitting on the mouse. Or he controls the Mushak. Mushak in Sanskrit (Devbhasha Samskrutam) is an air-hole or a very small opening, in this case it indicates the opening of the Sushumna.

So to conclude, Ganapati is not the playful cartoon that our TV has reduced him to. There is an entire tantra devoted to him. If you want to achieve Moksh, a basic puja of Ganapati at home is the first step. Keep a Moorthi of Ganapati with his trunk coiling to the left side, the Saumya form and at least light an oil lamp or an incense stick before him every day. He is the Vighnaharta, he will remove all obstacles from your path giving you your hearts desire.